Indoctrination: The Left’s Attack on our Public Schools

A collection of tales from the radicalized classroom.

Read our new ebook, 'Indoctrination: The Left’s Attack on our Public Schools': HERE.

Our public schools have traditionally been the cornerstone of our country's democratic values, teaching students how to think, not what to think. But in recent years, these most important institutions of instruction have been subverted by left-wing radicals.

Today’s K-12 classroom is a war zone. The left has used its control of teachers’ unions, teacher training schools in the universities, and textbook publishing to launch an all-out effort to indoctrinate students as young as kindergarten age with “correct thinking” on subjects ranging from the perdurability of white racism and the “fluidity” of gender to the evils of “Islamophobia” and the coming man-made Armageddon of climate change.

To combat this onslaught, the David Horowitz Freedom Center has initiated a campaign called Stop K-12 Indoctrination. Its fundamental principle is that students should be taught how to think, not what to think. Its centerpiece is a Code of Ethics that works, in collaboration with state legislators, to forbid teachers from using the classroom to advance an ideological agenda. Its flagship publication is a weekly newsletter, under the editorship of Sara Dogan, that reports from the educational battlefront.

The subjects covered by the Stop K-12 Indoctrination newsletter show the extent of the left’s penetration into American public education and the ambition of its indoctrination effort:

• The teacher in a Virginia high school fired for refusing to use male pronouns for a biologically female student who identifies as transgender.

• The teacher in Janesville, Wisconsin, who showed a leftist video in class titled “Why the Rich Love Destroying Unions” produced by the al Jazeera Media Network.

• The text assigned by the public high school in Newton Massachusetts funded by the Saudi Arabian oil company Aramco that states, among other things, that there is a “Hollywood Jewish campaign” to portray Arabs negatively in films and that Jerusalem is “Palestine’s capital.”

• The textbook for first graders in Elk Grove California that glorified California Governor Gavin Newsom, then running for office, as a “Champion for Peoples’ Rights” because of his support for gay marriage.

• The public charter school in Atlanta that dropped the morning recital of the Pledge of Allegiance in favor of a “Wolf Pack Chant” because the Pledge is insufficiently “inclusive.”

Indoctrination: The Left’s Attack on our Public Schools is a compendium of these and several dozen other tales which reveal the devastating scope of the Left’s corruption and takeover of our once-proud public school tradition.

These are educational horror stories. But they show that the left’s attempted takeover of the nation’s public schools can succeed only if it is allowed to take place in the dark. That is why the Stop K-12 Indoctrination newsletter is so important. The steady light it shines on this sinister effort is both a disinfectant and also a battle cry for concerned parents, education advocacy groups, and state officials who have the ability to ensure that our nation’s classrooms are places of objective and unbiased learning. 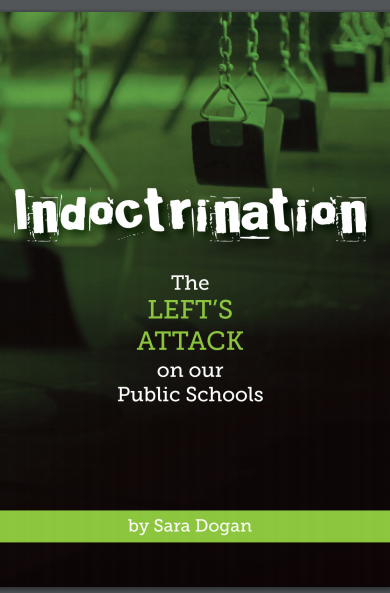